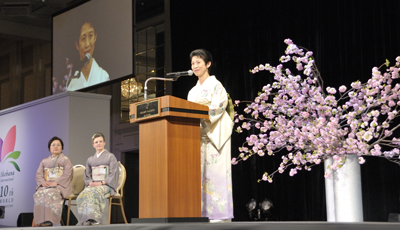 The Ikebana International World Convention 2012 opened on a quiet, forward-looking note. Despite Japan’s terrible natural disaster in 2011, a sluggish world economy, and I.I. acclimating to basic changes in its legal status, the mood was calm and positive. Following I.I. President Wienczyslawa Sato’s welcoming speech, Honorary President H.I.H. Princess Takamado declared the Convention open: ….. I would like you to look at Japan and see how much she has recovered, how much we are looking forward, but how much we still need to work towards restoring the Japan that was and possibly creating a new Japan.
World Convention Chairperson Nobuko Usui expressed a well-founded optimism: “For this convention we have chosen the theme Inherit the Spirit of Ikebana and Evolve into a Peaceful World. She then introduced the 86 I.I. chapters attending the Convention; members raised their hands as their chapters were recognized. The Japan Foundation President Hiroyasu Ando also gave a warm greeting speech. 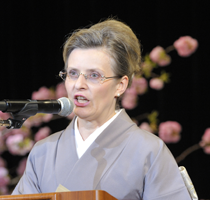 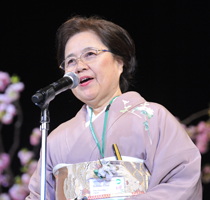 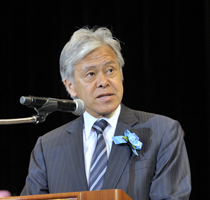 I.I. President Wienczyslawa Sato then presented certificates of honor to 20 I.I. members with 45 years of membership in the organization and to Leela Raj Kumar and Veena Dass, recognized by the government of Japan for profound contributions to promoting Japanese traditional culture abroad through ikebana activities. 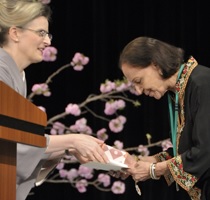 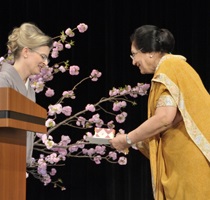 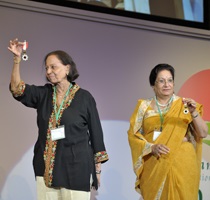 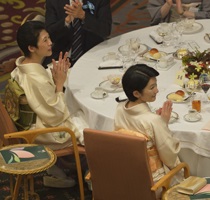 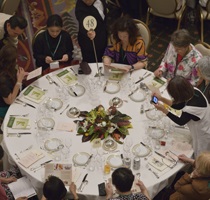 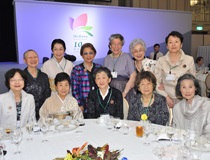 A toast was presented by Former Minister of Education, Culture, Sports, Science and Technology Atsuko Toyama, which was followed by a duet performance of the famous Drinking Song (Libiamo ne’ lieti calici} from Verdi’s La Traviata. Mr. George Newman from Washington, D.C., addressed the dinner as a representative “ikebana spouse. 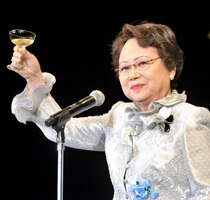 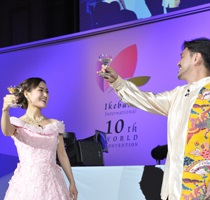 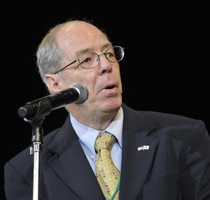 The entertainment was memorable: three dances from Okinawa. 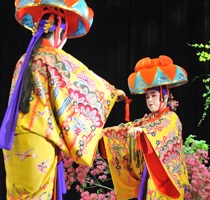 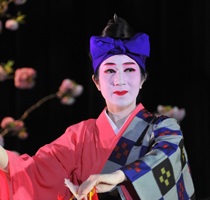 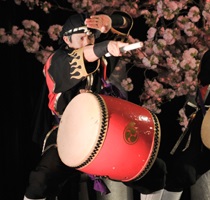 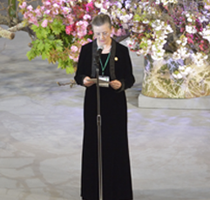 The remarkable warm sense of community and common goals that happened during the Convention was echoed in the quiet and forward looking ambience of the Sayonara Banquet. I.I. President Wienczyslawa Sato summarized this attitude in her address. “Our lives have intermingled this week, and we have all been touched in some way by this memorable event. We come from different countries, different cultures, with different backgrounds and different ikebana schools. We meet together as friends with a common bond and the shared conviction that friendship through flowers is timeless and precious. Dispersed in nearly 60 countries and divided into 163 chapters, through our common involvement in and love of ikebana, we are united beyond borders and time. 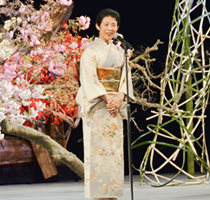 H.I.H. Princess Takamado also expressed the optimism that distinguished this Convention: “…The human race is also part of our natural world. We who look at flowers, we who have time with flowers, know that though each flower has a transient life, when they are brought together, they form a beautiful harmony. All of you are different flowers. All of us get together. Ikebana International is a beautiful, beautiful ikebana arrangement. It changes, but each time it shines.” 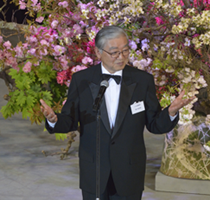 With the wit for which he is famous, I.I. Honorary Advisor Mr. Tsunenari Tokugawa proposed a toast: “For the future success of Ikebana International, and not only this group…also the spirit of loving flowers and loving nature should spread to the entire world…” 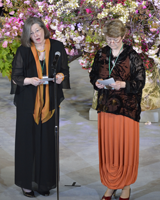 Convention Chairperson Nobuko Usui introduced members of the Convention Committees with deep gratitude for their dedicated work. Her farewell address expressed a sense of positive commitment to the future and the hope inherent in love of flowers and nature. 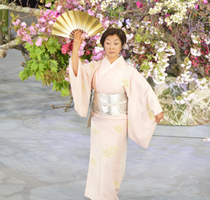 The singing of Auld Lang Syne this time had a special warmth and energy, expressing the sense of community and purpose that was generated with the Business Meeting and was amplified during the Breakfast Discussion. 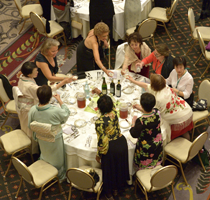 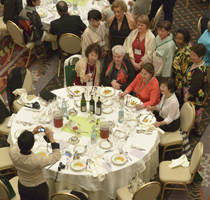 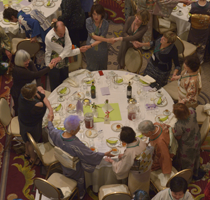