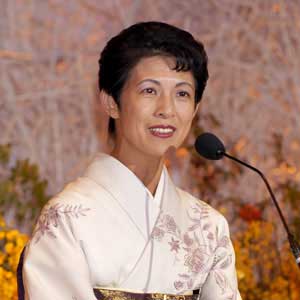 What would the world be like if over 1,000 wellwishers from 33 countries assembled to celebrate the 50th birthday of every person on the planet? A ridiculous rhetorical question? But that is just what happened at the Ninth World Convention and 50th anniversary fete. This gala event was so popular that, unfortunately, not all applicants could be accommodated. How fortunate for I.I. to have such staunch friends and members. Representatives of 92 chapters were seated at 96 tables in the Hiten Hall. Quietly and with dignity the epochal event began. The 50th anniversary celebration infused the entire Ninth World Convention with a happy and festive mood. This joyful occasion was also a time of reflection and thanks. The opening speech by International President Nadia El Borai was followed by congratulatory speeches by Her Imperial Highness Princess Takamado and President Sekiho Hihara of Ikebana Geijutsu Kyokai. 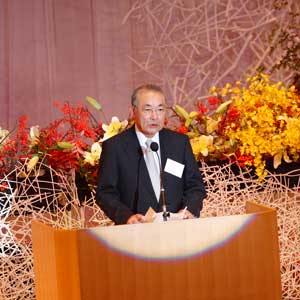 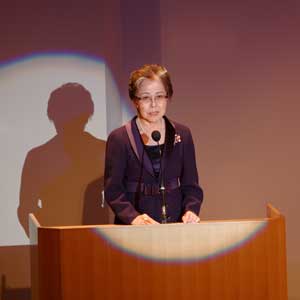 Then tributes to Ellen Gordon Alien and Fay Kramer were presented. The first was given by Mrs Kobai Naruse, Soke of Chiko School: “Congratulations to Ikebana International Ninth World Convention. My relationship with Mrs Alien goes back to the Second World Convention. She graciously invited me to her home and showed me the ikebana there. Mrs Alien mentioned that when she passed away, she would like to become a butterfly and attend future conventions. That’s why I use butterflies a lot in my work. I also knew Mrs Kramer, the first president, who was a very respectable, kind, and friendly person.”
After floral tributes to the two ladies by past presidents, Honorary Advisor Etsuko Hattori spoke about the important roles in the early years of 11 of three distinguished ikebana masters, Houn Ohara, late lemoto of Ohara School, Sofu Teshigahara, late lemoto of Sogetsu School, and lemoto Sen’ei Ikenobo, and the great contribution of Mi Kazuo Ishikawa of Shufunotomo Co., Ltd. and Mr Eikichi Yokohama of K. Mikimoto & Co, Ltd. She also recounted that during the past 50 years, I.I. was supported by many ikebana schools and by the general membership.She then went on to a few individuals no longer with us: Mr Norman Sparnon of Australia, Lady Delamare of Great Britain, and Past President Martha P Neese. 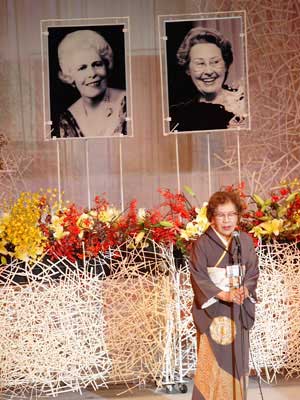 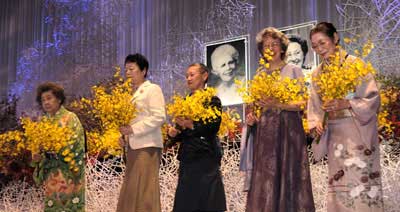 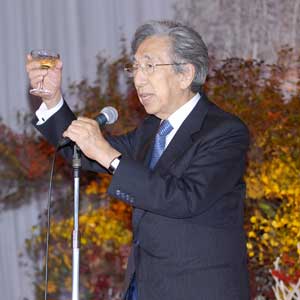 The formal prelude to the Welcome Dinner ended with Convention Chairperson Yoriko Ikezawa citing the work and efforts of many people in Japan and throughout the world that contributed to the holding of the convention. The Welcome Dinner started with a toast by Mr. Reijiro Hattori, Honorary President of Seiko Watch Corp.
The artistry of master guitarist Mr. Sunken Nagano started off the entertainment of the evening, with his performance of variations on the theme Sakura Sakura. Two dance troupes enlivened the evening. The joyful and festive Sado Okesa dance from Sado Island was performed by Wakanami Kai, and a vigorous Onidaiko (roughly “Demon Drums”) dance derived from sacred Shinto kagura dance/drama was performed by the Wassaki Omdaiko Preservation Society.

This dance evoked the unruly power of natural forces, and the drumming was unusually complex and interesting. The program closed with vibrant energy and bright anticipation of events to come.

The final get-together of the Convention in the Hiten Hall saw attendees decked out in splendid raiment, echoing the beauty of the flowers loved by all attendees and that form a fertile foundation of friendship in our organization. Speeches were given by H.I.H. Princess Takamado, International President Nadia El Borai and, representing her husband, Kazuo Ogura, President of the Japan Foundation, Mrs. Noriko Ogura. This was the last official duty of our Honorary President H.I.H. Princess Takamado had graced the Convention with her presence every day and she had gone far beyond her official role in her warm interest and appreciation of every aspect of the event Ikebana International is indeed fortunate to have a such a warm-hearted, sunny, and devoted Honorary President. 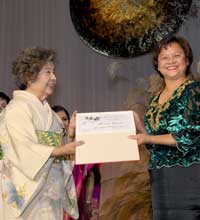 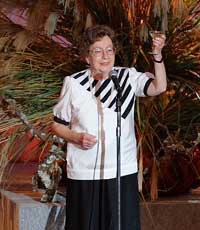 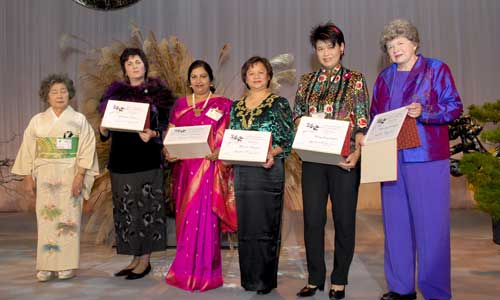 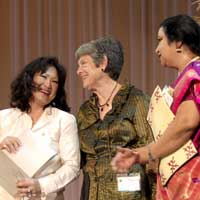 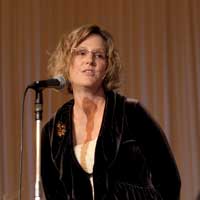 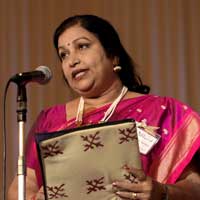 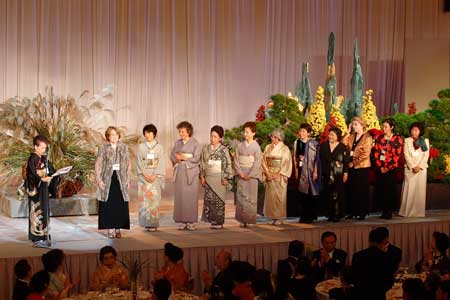 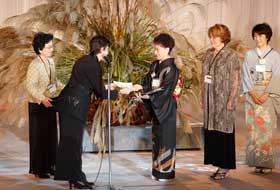 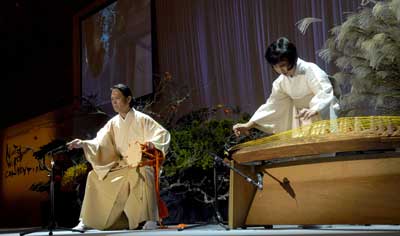 The final event of the banquet was a concert of contemporary Japanese music of the highest quality performed by Shonosuke Okura, o-tsuzumi drum, and Kazue Sawai, koto. The work was entitled Sanbaso, a composition of Mrs. Sawai’s husband, Tadao, a major composer of contemporary koto music. Unlike the often saccharine sound of the traditional koto, the Sawai koto explored the full dynamic range and expressive power of the instrument and produced an almost symphonic effect. This forceful performance of this usually sweet instrument was beautifully complemented by the percussive artistry of Shonosuke Okura on the otsuzumi, the larger of two hourglass-shaped drums used in the Noh drama and by his expressive vocalizations. Mr Okura is of a long lineage of Noh drama tsuzumi musicians and has performed widely in many countries.

He is also Iemoto of the Okura School of tsuzumi drumming. This combination of vigorous koto artistry, percussive sound, and vocal dynamic represented a surprising and marvelous contemporary exploration of Japanese musical tradition and showed contemporary Japanese composition at its finest. Even members of the audience not familiar with contemporary music found this sensitive concert compelling.

Convention Chairperson Yoriko Ikezawa then gave a closing address. Ikebana International wishes to express gratitude to all the honored guests and to all participants, whether present in body or through goodwill,ho made the Ninth World Convention such a success. The dinner ended with the traditional Auld Lang Syne, with the warmth, friendship and creative energy of those intense few days flowing through and felt by everyone present. As attendees left the hall, they were presented with a lovely “Moondust”
carnation, a thoughtful and charming gift. A marvelous and happy convention came to a beautiful close. 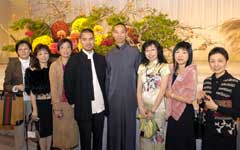 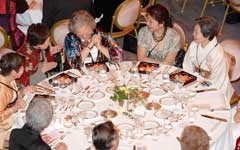 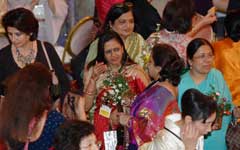 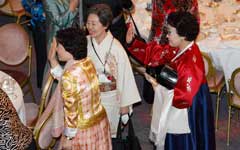 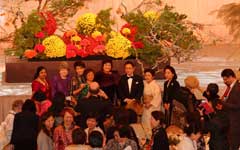 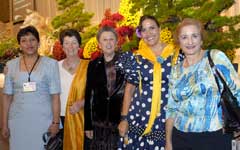